Upon completion of the interview portion of the study, participants completed the survey of lifetime and current psychoactive substance use. Data from this survey was not included in the current analysis.

Participants were then given a list of resources for more information about substance abuse and local substance abuse treatment providers. Content analysis was performed using a thematic analysis framework. This qualitative analytic method was chosen because it allows researchers to highlight similarities and differences across groups of participants.

The interviews were transcribed and then coded by the first author and two research assistants using MAXQDA 10 a qualitative research program. Codes were developed inductively by reading the transcripts multiple times and noting patterns of reported motivations, reactions and behavior described by participants.

Stay up to date

Prevalence and pattern of substance use among the higher secondary school students of Imphal, Manipur, India. Only a few There were interviewers supervised by a team of 18 experienced regional supervisors. Eur Addict Res. J Prim Prev ; Murray, D.

Themes were identified by the first author and reviewed by the rest of the authors.

Themes identified in the interviews of early initiators, defined as individuals who initiated substance use prior to attending high school were compared to themes identified in the interviews of participants who initiated substance use in high school or later. The authors chose this definition for early use because participants more readily remembered their first use of psychoactive substances in the context of their grade in school rather than their age.

The common initiation situations described by both early and later initiators indicate that substance initiation is viewed as a normal adolescent behavior that is expected to produce pleasurable physical and psychoactive effects. Participants were most likely to initiate substance use with alcohol although some participants initiated with tobacco or marijuana or a combination of alcohol and tobacco or alcohol and marijuana.

None of the participants reported initiating with a substance other than alcohol, tobacco or marijuana. Substance use appears to have been the primary activity during initiation instances and participants described it as the central focus of their activities rather than as substances being used to enhance other activities. Many participants reported that their decision to use substances occurred spontaneously when the substance was offered to them. Although some of participants did experience some degree of encouragement or coercion by peers, the decision to use substances was rarely the result of strong persuasion or coercion by peers.

Rather, participants reported that they simply wanted to fit in with the individuals who were offering them substances. Interviewer: Okay, what did you think the other people would think of you if you said no? Things like that. The common belief that substance use is a normal adolescent activity was supported by the fact that participants typically expressed neutral or positive opinions about initiating substance use.

It was rare for participants to express feelings of nervousness, guilt or even ambivalence related to use. When describing the psychoactive effects of substances during their first use, participants usually reported pleasurable emotional and perceptual effects. And I like to write music and stuff like that and I was hearing stuff. And I hear that anyway, I was just hearing it differently and it was more intense. When participants did report negative effects of substance use these effects usually focused on unpleasant physical effects such as nausea or dizziness.

Participants were most likely to report using substances for a second time within three months after initiation with some using within one to two weeks.

[5] The onset of drug use is often rooted in adolescence, and studies show that In this research, all articles related to substance abuse and its patterns among. Substance use in adolescence is heterogeneous, ranging from .. between adolescent self-report and urine drug test results (Gignac et al.

The most common reason for using substances in the first year following initiation was that participants enjoyed the effects of the substance, felt that substance use was a normal activity for people their age and to fit in with peers. The common perception among participants was that substance use was a normative expected behavior that also provided pleasant emotional and perceptual experiences. The most common strategies participants used to avoid getting caught were to avoid or minimize contact with parents and guardians while intoxicated.

Participants who used this strategy reported that the parents of one or more of their friends allowed them to use substances or did not monitor their activities closely enough to detect use, implying that a lack of monitoring or approval of youth substance use by adults within communities can facilitate use independently of the effects of parental monitoring and parental attitudes towards substance use. 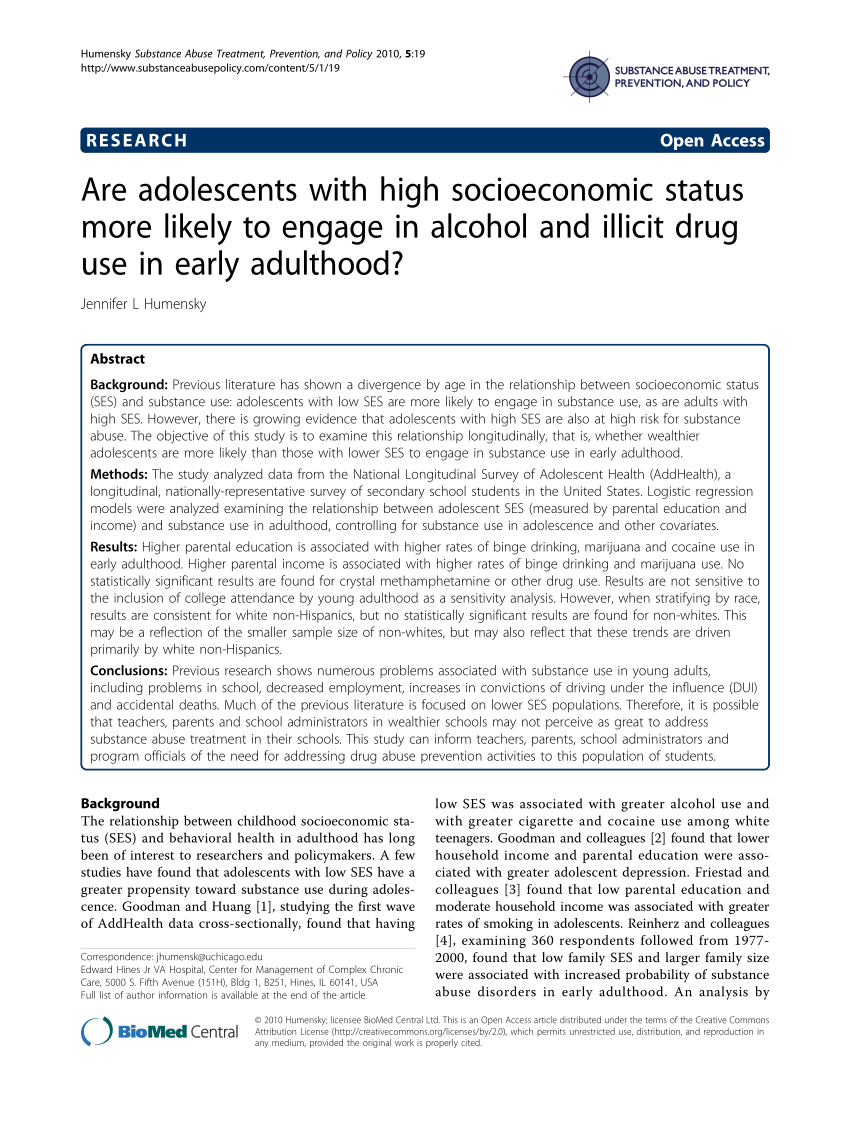 One participant reported that his mother allowed him to smoke marijuana. I said yeah, but she said she already knew because my eyes were always red. She said well you can be open to me like that, because I just moved with her and we had a lot of privacy with each other.

Interviewer: So other than talking to you and telling you to be honest with her did she do anything else or have any other reaction? Other participants reported that although their parents or guardians disapproved of substance use they were unable to recognize signs that their children were intoxicated or were not home often enough to detect even regular use. While the common initiation contexts and pattern of use in the first year following initiation of early and later initiators displayed some similarities, three differences between the groups were detected: 1 Differences in social and environmental context; 2 Parental substance use facilitated substance use by early initiators; and 3 Early initiators were more likely to describe patterns of use associated with increased risk of poor outcomes such as daily use.

Interventions for Substance Use Disorders in Adolescents: A Systematic Review

In some cases, participants were able to steal substances on a regular basis because their parent was frequently intoxicated and unable to monitor their own supply of alcohol, tobacco or other drugs. So I would often go get drunk, not only that she was on a bunch of medicines, and I used to pop her oxycontins from her surgeries.

And she was on some weight loss pills too, and I found a way to mix the weight loss pills by crushing them up, crushing up xanax and half of a klonopin, throwing it in orange juice. Other participants reported that substances were supplied directly by parents or guardians.

Early initiators more frequently reported that parents or guardians facilitated their substance use and more often named parents or guardians as influences that encouraged them to use substances in their first year of use than later initiators. Early initiators more frequently reported problematic patterns of use including using substances alone, escalating to daily use and appearing to have less interest in activities such as getting good grades or participating in organized extracurricular activities that might inhibit substance use escalation than later initiators.

Early initiators much more frequently reported that they initiated substance use alone rather than in social situations than later initiators. One early initiator described his pattern of marijuana use:. I would basically go and smoke alone and that would mellow me out or get me back to that kind of baseline personality and I would go out and meet people and be social. When describing their pattern of substance use in the first year of use early initiators more frequently reported that they escalated to daily use within the first year than later initiators.

Inhibitors of use also varied across early and later initiators. Early initiators more frequently reported that the main inhibitor of use in the first year was lack of opportunity to use substances than later users. Later users often reported that other goals such as performing well academically or athletically and a fear of being caught were the main inhibitors of substance use in their first year of use.

Therefore, later users may have been more likely to have formed attachments to prosocial groups and adopted conventional norms that served to lessen their use of substances. The interviews with young adults revealed differences between early and later initiators in initiation contexts and the pattern of use in the first year. Early users, as expected, describe much more problematic attitudes toward substance use, more negative patterns of use in the first year and less attachment to prosocial goals [ 6 ].

The interviews with early initiators indicate that they are often initiating substance use in home environments where they are not being closely monitored by adults. This lack of monitoring allows them to use substances in their own home or backyard and to steal substances from their homes.

here In some cases, adults are actively facilitating use. These results help explain why substance use by parents is correlated with early initiation [ 5 , 6 , 33 ]. These results indicate that prevention and early intervention programs aimed at children who are at risk for early initiation or children and early adolescents who have already initiated substance use would benefit from a strong family component [ 34 , 35 ]. Parents who use substances need interventions that will allow them to develop skills to deliver strong anti-use messages to their children despite their own use, to secure and closely monitor the substances in their homes and to monitor the behavior of their children.

Although family-based prevention appears to be a promising strategy, the family contexts of some of the respondents indicate that not all families would be able to respond to such interventions. Parents who are dependent on substances other than tobacco likely face significant challenges in preventing use by their children.